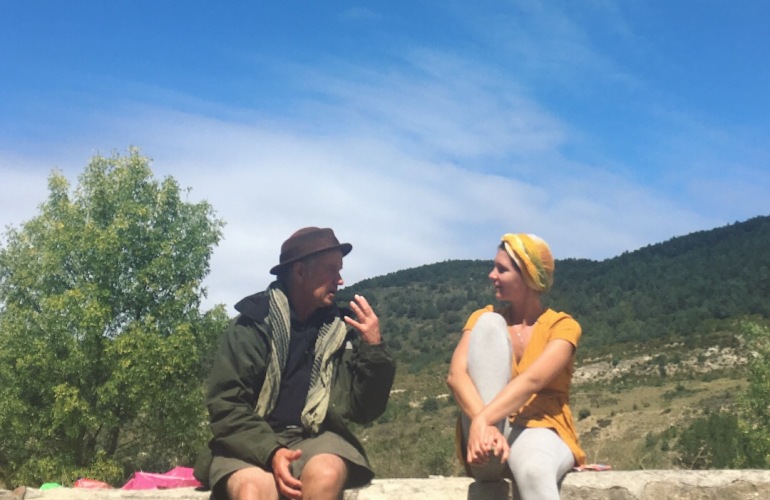 September 1 was the first day of walking. I set out with Igor and an Austrian gal, Magdalena, and we left the municipal albergue at 6:30 and clip clopped down the cobblestones, past the cathedral, over a bridge, up a hill, up a mountain, past sheep with bells and paint on their asses, past asses, past horses. Our legs burned and the sun rose (color of a rose).

The first day of the French Way is the hardest because you go up and over the Pyrenees Mountains if you’re following Napolean’s route. You can take Charlemagne’s if you like but it’s not as epic. It’s treacherous in the winter and we saw crosses and photos along the way of people who had died.

The higher we got, the colder and foggier and mistier the air was. There were danger signs that said

And this cold, wet walk lasted hours and I talked to lots and lots of people, and I passed people who then passed me and somehow passed me again. We walked out of France and into Spain, and eventually down a steep hill of beech trees. After many things happened, we arrived in Roncesvalles, Igor and I.

Roncesvalles is the site of a big albergue, and throughout the afternoon, almost 300 pilgrims streamed in, lining up at the office to get their pilgrim passports (henceforth credencial) stamped and a bed assigned them.

Once you plop down in a bed early in the afternoon, there is nothing pressing to do until dinner. On this first day, I washed my clothes and explored the grounds and talked to a hairdresser/train conductor from Barcelona. At the mass, the priest blessed our journey in many languages, and then I went to dinner and sat with an opera singer and a chocolate maker from Belgium and Brazil, respectively, and we talked about the happy and tragic things that brought us to that moment.

A lot of people snored at night.

September 2 was the second day of walking. I set out with Igor, Magdalena, Rafael from Austria, and Nicolas from Belgium, who started walking to Santiago on June 26 in Brussels. He had a dirty backpack and strong feet and worked trekking poles like nobody’s business.

In the morning, we politely exchanged our statistics (where are you from why are you here what do you think how are your feet what do you do). Nicolas sang a French song about pilgrimage and we listened in rapture as his clear, gentle voice pierced the fog and the fields. Igor sang a song from Basque country about birds and freedom and he said he didn’t have a good voice but he did. I sang an old hymn and my voice didn’t carry by the time I sang it because we were in the woods then. In three hours we were best friends and asked personal questions (no really why are you here are your parents together why did you two break up how is your chafing) We all sang Here Comes the Sun to summon the light. We sang it all day until it worked and we arrived in Zubiri and it was bright.

Our group had been splitting and growing all day, but we were together when we crossed the medieval bridge into town (called the Bridge of Rabies, because if you lead your horse thrice around the central arch it will be healed). We went out for beers, and then to dinner together, picking up in all this Ted from England and Phil from Germany. And after dinner, we sat on the ground under a colonnade and stretched. Ted remarked that this didn’t make him uncomfortable, even though he would never do it at home.

Then we went back to the first bar for another drink, because we were enjoying each other so much and our conversation kept getting goofier and baser and louder. I felt a twinge because the next day I was planning to stay at Zabaldika, a parrochial hostel run by the Sisters of the Sacred Heart eight kilometers before Pamplona. Everyone was planning to go to Pamplona the next day so this meant saying goodbye to my new best friends. I wanted to keep walking with them, because yes, I knew I’d meet more people, but I already had affection for these people. But the wiser part of me knew that my path couldn’t depend on theirs. “Walk your camino,” they all say. I decided I would decide whether to say goodbye to them or to my plan the next day, anyway.

Lots of people snored at night.

As the search for breakfast became an unsuccessful search for lunch our group reached into the bowels of our packs and pulled our emergency food which we shared with the effortlessness of old best friends. Igor, Magdalena, Rafael, Nicolas, Phil, and I ate tuna and macarons, chickpeas, a Clif bar, an orange, a banana, fruit snacks.

It was after this that we turned off the main path toward Zabaldika. We climbed up a hill and came to a stone church filled with people and a yard full of trees with colorful flags strung up between. We had stumbled upon Zabaldika’s celebration of the Feast of St. Stephen, which doesn’t fall until December 26, but, as one of the sisters explained to me, it’s so much nicer to have the party when it’s warm out. 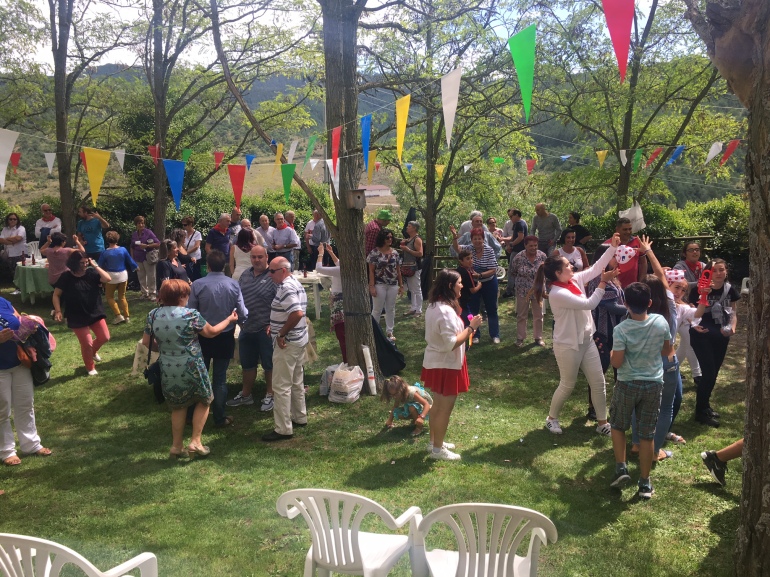 Magdalena, Phil, and I decided to stay and Igor, Nicolas, and Rafael went on. It was the first real goodbye of the camino and it was sweetly sad. Igor was my first friend in Spain and taught me words in the Basque language. Rafael had a wicked, good-natured sense of humor and cared for all our blisters and sprains and slight chills with his Mary Poppinsian first aid kit. Nicolas, a pastry chef in Brussels, had the kindest blue eyes. One of the Austrians said, “But we have a saying: ‘You always meet twice in life.’”

One last cigarette, and then goodbyes.

While we waited for the albergue to open, Ted, Magdalena, Phil, and I sat by a deflated Spiderman bouncy castle (for the feast of St. Stephen) and had deep talks about fathers and travels and the future and places you can go where it’s easier to touch the supernatural.

“There are a lot of thin places on the camino,” said Ted.

We explored the church. Rang the bell from 1377 and it echoed. Watched a band of teenagers play alt rock-ska music for St. Stephen and had cheap wine in plastic cups. Ate dinner together and prayed and shared together and there were a few tears and much unexpected warmth.

A lot of people snored in the night.

September 4 is the fourth day of walking. Ted, Magdalena, and I said goodbye to Phil, who will walk part of the camino with his father in a few days. He had his bright green towel hanging off his pack all morning and his trekking poles sticking up and he looked like an alien bug hiker superhero.  And we are now landed in Pamplona, in an albergue filled with stinky, American, Chacoed, peanut butter-eating… World Racers.

So, so far? I love it. I have loved every minute of it. I’m stoked to wake up before sunrise and walk all day. My legs love it. It’s like when you get off a boat and your feet shift and rock on their own. Already, after four days of walking, my body buzzes when I stop and I feel like someone is pushing my back. You walk a very long time, and then you rest a very long time. There’s such a rhythmic momentum to this trip.

It’s a delightful mix of having total power over your life and none. You can walk as far as you want, stay where you like, eat what you will, walk with whomever you choose. Yet you cannot control the weather, or who sidles up next to you, or what’s on the menu if you order a special pilgrim meal, or how your feet will fare, or if you will be walking on a road or a charming forest path.

This is a season I’ll look back on as “the good old days,” except I know I’m in them and can love them for what they are right now. I keep feeling sad about leaving and then remember it’s all just starting, and it’s too good to be true, that I have so much time here yet.