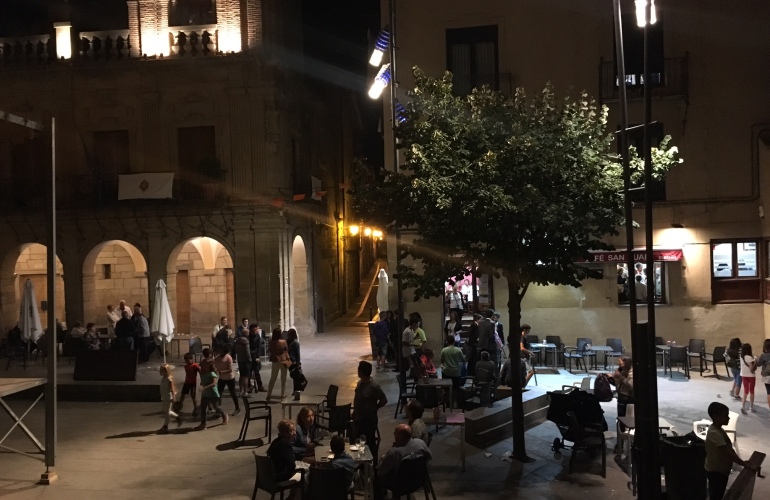 On the 7th, I decided to walk backwards for a few kilometers to a small intermediate village, Villamayor de Monjardin, where I stayed in an albergue run by “earnest Dutch ecumenicals.” When I arrived I heard wholesome laughter, acoustic guitar, and the unmistakeable refrains of Hillsong and Jesus Culture. A chalkboard by the door announced a “Jesus meditation” at eight o’clock.

The albergue was lovely and too settled to creak, and in the 500-year-old building was a dark, crusty room that used to be a stable for goats, but has since been plastered and sealed into a dank cave and festooned with low-hanging paper lanterns and floor pillows. It was one of the best rooms I ever entered. In that room we prayed and read Bible verses together and learned we had vague connections to each other through our travel and missions backgrounds.

The next day I left very early and walked 30 kilometers to Viana. That’s 18 miles. I was afraid I would not get into the donativo that day and was rushing, which, of course, you are not supposed to do on the camino because you’re supposed to be all zen and crap, but when the path is so busy and you have the strength in your legs to hustle, you want to book it.

I walked alone for most of the day, feeling blissful in the vineyards and rolling red clay hills (so different from the rainy forests of a few days ago in the Pyrenees). I picked figs and grapes from the side of the road and they were the sweetest I ever tasted. And then after a while I got tired and felt that maybe it was selfish to try to walk alone, and maybe I ought to find some companions. And then I felt lonely. And then I figured I didn’t need to worry too much about any of those feelings because they change so fast.

As I hustled through the countryside, I got stuck behind some women I had met briefly and so we got talking, and they walked slower than me. I tried to end the talk and move on, but it didn’t happen and so I forced myself to relax and make conversation about skiing and our dream jobs. And I feared I wouldn’t get to Viana’s donativo in time.

And then I was going through a gully, only a couple hours from the end, and two more women were on the side of the path under a tree. One was squatting and hitting something with a rock and the other was walking around the base of a tree. They waved me down and I waved without slowing, but the squatting one cried out:

“Come have one!” said the other, picking one up from the ground.

I have never eaten an almond straight from a tree before. I didn’t even know what an almond tree looked like. They found me one and I cracked it open and savored it, and thanked them.

I hurried on, but now my water was enpty and there were no more fountains until Viana. I got thirsty and so instead of rushing I stopped in the shade wherever there wwere blackberries and ate.

When I finally got to Viana and the albergue, tired and thristy and trying so hard to not try so hard, the hospitlero was hanging a “COMPLETO” (FULL) sign on the door. I asked if he had another bed.

“I have only one more,” he said. He showed me a mat under a table and said welcome. And so I didn’t need to worry anyway.

Magdalena and Stephan had walked ahead of me and were having drinks in the plaza and I joined them for a couple beers during siesta, then took a walk alone. I stopped at a coffee shop with a chalkboard advertising carrot cake and “Jesus meditation” in English and stopped in, curious.

There were two men, one my age named Tyson and one older named Wes, who greeted me in English, and I asked if they were related to the albergue in Villamayor, and they said yes. They were from Vancouver and working there a few months and Tyson was starting the camino himself in a few days. They had no carrot cake, but they brought me a tub of hot water for my aching feet and I sat in their coffee shop, eating a cookie, resting, and talking in spiritual and geographical codes I understood. Wes’s wife, Sherrie, returned from the station with a twenty-something niece, Victoria, who was about to get a master’s from Oxford, and we all chatted for a couple hours. Victoria, Tyson, and I went to the church and observed mass from the back for a few minutes, and then, after expressing our affection for tapas, went out for a quick round before my albergue’s communal dinner.

I was a minute late for dinner at the albergue and everyone goodnaturedly booed me as I entered, muttering, “mea culpa, mea culpa, mea maxima culpa.” Because I was the last one there, I was asked to pray over the meal, and then it was a quiet meal because we all spoke different languages. The hospitalero, Jose Manuel, was an older man from Morocco who has a bad heart and, if I understood correctly, limited time left, and so he spends his days going to albergues to volunteer as host, cooking for and welcoming pilgrims. He spoke no English. He waved and said, “YO!” to the photo of Pope Francis by the dining room door whenever he passed it.

My Spanish is good enough that I can ask questions, but not good enough to understand the answers. The other pilgrims thought I spoke it though and kept asking me to translate whatever Jose Manuel said to us.  I assured them that I really, really didn’t know the language.

A man entered the room at the end of dinner who seemed friendly with Jose Manuel and I asked if he had helped with the dinner too.

“Ah, no, I had pinchos with protestants.”

After dinner we had a compulsory prayer time, which most everyone grumbled at. The priest gave us papers with psalms and prayers and a hymn in our own languages and led us through a door in the albergue that opened onto the great balcony of the now dark church. Sounds of parties and light from bars eeked through the high Gothic windows. We sat in the pews and the priest asked me to translate for him.

I drew more on my Latin and Christianity than my Spanish to relay what he told us in the awkward half hour of worship, about the psalms being poems about tragedy and joy and supplication, about it being necessary to sit in the presence of the Lord. The people around me scoffed at being forced to pray and giggled at my inept translating, but it was lovely. He had us sing the French song Nicolas sang our second day of walking, the one about pilgrimage. “Ultreia,” it says. Onward. Our voices echoed in the cavernous beast of a building and I wanted to keep singing but it was time for bed.

I walked into the plaza to fill my bottle at a fountain and took a moment to observe the streets, so empty that afternoon and so full tonight of drinkers and waiters and families and kids climbing on a stage and kicking footballs and dogs chasing each other. Even an effigy of the infamous Cesare Borgia, killed in this very spot centures ago and buried under the thoroughfare rather than in a proper crypt, stood in the crowds, included.

And on my mat under the metal table, the snores of the big German man on top echoed like they were in a church too.

2 thoughts on “Slowing Down, Being Late, and Pinchos with Protestants”