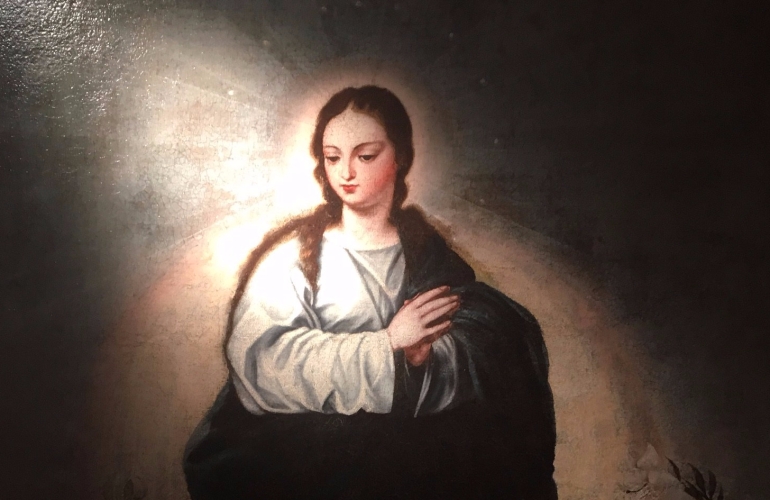 I prayed I would meet someone on the Camino, and I met someone.

On the morning of the 9th, a German we will call Mike, because that is his real name, asked to walk with me. He said that I wasn’t like the typical American with my big sunglasses and dorky hat and I said thank you, even though I had both. He was tall and handsome and friendly and knew what he wanted. What he wanted was to declare his lust for the charmed life the camino granted him. He was likable and influential (I know because he told me so), and on the way to Logrono he told me about all the women he met on his last camino, and how much they liked him, and how cute they all were. It was raining while we walked.

“There was a Norwegian girl who walked 40 kilometers a day and had big walking sticks–not trekking poles, I mean tree trunks from the forest–and she was so happy, and she just was naked when she waited for her clothes to dry and I loved her.”

“But she walked so fast so I had to let her go–you know what they say. And there was a French girl who was a real woman. I tell you, French women are women. Not like you Americans. Your women are like men, so big and strong, you know. I want a woman.”

“Mmm, would you say that? That’s a kind of problematic–”

“This real woman, she was so cute, and I can show you a picture later if you want, and she and I, it was the real deal, and I loved her. We drove around Southern France in a convertible after the camino. And she was so hot the romance burned up in three months.”

“No, it was amazing! I mean, of course I cried a lot, but that’s why I’m back here. To fall in love. But I think maybe I have fallen in love already.”

“She is tall and she has dark hair and dark eyes and light skin and she is so beautiful and I want to be with her and hold her close. She is German and her name is Ama and she is coming one day behind me so I will wait for her in Logrono and tell her it was a mistake I made, I never should have stayed with those other young girls, because I should have waited for her.”

“So you’re going to lie in wait on the camino waiting for Ama to come by and tell her you love her more than the three girls you ignored her for?”

“You think she’ll want to be together?”

“Oh yes, because she was all over me in Pamplona and I believe she will want me even more now.”

“It works out that easy for you?”

“Sometimes! With love, you just need to go for it.”

The problem with this unrealistic perspective is that for some suckers out there, it works.

“Oh, I was one of the first people on the internet. I sold cell phones online.”

“34. Get my phone out and I’ll show you pictures of my French girl. How old are you?”

I lifted his poncho and gave him his phone and water and said, “26.”

“I was walking with younger girls a couple days ago but I got bored.”

“Oh, yeah. You said.” I tried changing the subject. “So, what about the camino made you want to do it again?”

“Since doing the camino, I have become myself.”

“I tell you, on the camino, all your wishes will come true,” he said.

“Yes! Every single one! If you want it hard enough, it will happen. You just need to want it. It worked for me!”

“Because you fell in love?”

“Yes! It’s wonderful! My god, my life is so good! Look, this is my French girl. This photo makes her look ugly but she’s pretty.”

“She has a nice smile and I can see she’s pretty.”

“Maybe when we get WiFi I can get on Facebook and find more pictures of her.”

“I think this picture says it all, with that lovely smile.”

When we walked into town, Mike and I went to the only coffee shop that was open and sat in there while it rained. I read brochures about Logrono and tried to get internet while he stuck his phone in my face and continued gushing over his past loves, showing me the sunset he made out during, the rooftop on which he danced with the Norwegian, the bad drunk selfie he took that only caught half the French girl’s face.

“Okay, Mike,” I finally said, “I’m going to go to the opposite corner of this place now to write by myself with no distractions. I’ll see you later, maybe in several hours.”

“Which albergue are you staying at?”

He went to the one with the mandatory church service.

After exploring Logrono, I was dozing on a mat on the floor and opened my eyes to seep him tiptoeing over the other pilgrims’ luggage to me. He crouched and put his face very close to mine.

“Good, thanks. I went to two museums and had tapas. I ate pig snout.”

“Are you going to mass tonight?”

“It had very thick hairs. I think so, but I’m afraid I’ll fall asleep in the pew.”

“A couple days ago I was so drunk, and it was funny because I really didn’t know when to stand and sit. It’s like the Catholics can’t get comfortable.”

“The other day,” I said, “my friend Magdalena and I had tequila shots but then we went to mass, and she was so giggly she–”

“You know Magdalena?” he interrupted.

“Yeah, we walked together for a few days,” I said.

“Wow, I should have walked with you then!” said Mike. “I must not have noticed you because I only had eyes for her.”

I didn’t say anything.

“But she had so many men around her, I never had a shot,” he said.

“Well, that was a few days ago, and they’ve gone on ahead.”

“They were all Americans.”

“No, there was an Austrian and a Belgian and a Spaniard,” I said.

“Yup. We have spent lots of time together. I thought you were waiting here for that other girl.”

“I never would notice you next to her, because she is so cute. But it would never work between us because she doesn’t eat, like anything.”

“Well, she’s vegan, and it’s hard to be vegan in Spain, and a common misconception that–”

“No meat! No cheese! It’s too complicated.”

“It could never be.”

“So you just wait for Ama like you’ve been planning.”