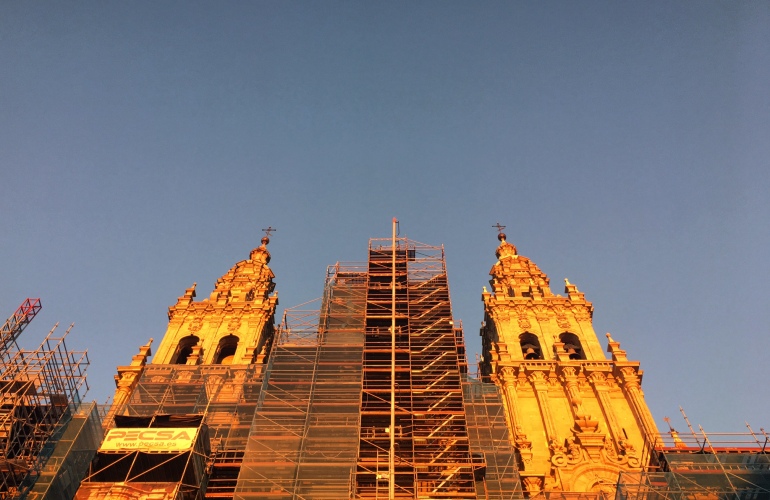 On the 36th day of the journey, I left the albergue in Monte do Gozo alone, before six o’clock. I wanted to do the last 4.8 kilometers just with God.

I was wearing my best clothes: my one dress and my Smartwool sweater. I was eating a yellow plum.

The camino was poorly marked, and it wound back and forth and I didn’t know if I was even on the correct camino in the correct direction, since they were all starting to converge.

But in an hour, I was there. I was there before I knew it. I turned a corner on a cobblestone road, amber-lit, and against the field of stars, I saw the black monstrous towers of the cathedral.

I made my way to the vast plaza and stood before the church. I was alone. It was quiet. A low band of blue promised the eventual sunrise.

And there was a flash of gratitude for the cathedral: if it didn’t exist, I never would have walked here. It drew me here. It took 800 kilometers of weighted walking to win this moment. I did it, with the grace of God. I stood before the tomb of my ancient brother in Christ. I did what millions of pilgrims did before me.

I would have felt more things, but I’m terribly sorry to confess that the full gravity of the event never came to pass because it was hijacked by the basest of urges:

I really had to take a dump.

I felt it coming on as I walked in and ignored it, but by the time I saw the cathedral, I was, for the first time in my life, considering squatting behind a building to poop.

No one would see me, and I have toilet paper, and nothing is open anyway, I reasoned. People do it all the time; it’s very normal.

I clenched, scuttled, waddled away from the cathedral, across the plaza, down the best-lit road, hoping for a cafe open early. Finding none, I resigned to publicly defecating at one of the holiest sites in all Christendom and turned into a dark corner where… praise the Lord, there was a public restroom.

Relieved in both senses, I continued to the Pilgrim Office, which had a long line an hour before it opened. A hundred people waited at the doors to receive their Compostelas, including Ted, whom I hadn’t seen in over a week. We hugged and caught up and traded vignettes of our walks, and it was the first of many joyful reunions that day.

We waited in a long sterile hallway, until a fake bell sound rang and we were directed to people behind tall counters.

When it was my turn, I gave a man my pilgrim passport, which contained stamps from all the albergues I slept in, along with museums and churches and cafes.

“And you walked the whole way?”

He looked up at me and into my eyes.

“Do you promise me you walked the whole way, Chelsea?”

“Yes.” And I smiled because I really did.

He wrote my name in a blank spot on the Compostela. It was in Latin.

“We normally would put your name in Latin as well, Chelsea, but it’s so English, I’m afraid we can’t.”

He gave it to me, and it felt like I just got a diploma.

I stored my pack there at the office, and went into St. James’s Cathedral.

It is being restored, so great portions are covered in scaffolding. One of the towers looks like it’s wearing a shower cap. And even if it weren’t partially hidden, it’s not the most beautiful space I’ve ever been in. But of course, that doesn’t matter one bit.

Behind the altar is a bedazzled statue of St. James. And what you do is climb up behind him, into a sort of tunnel that is all gold and massive cherubs, and you hug him. I stood in line to do this and studied those in front of me. They rested their head on James’s shoulder. One man put his forehead on the back of his crown. Lips muttered prayers.

This pilgrimage is growing so big and commercialized, and the offices and hostels churn pilgrims out efficiently and impersonally, but this was intimate and holy and human, to be allowed into a sacred golden chamber to revere the founder of your journey.

When it was my turn, I approached him and put my hands on his shoulders, which wore a silver, jeweled mantle. I put my face next to his and we looked out into the dark, vast cathedral with our cheeks touching. I set my chin on his shoulder for a moment.

Then I patted his back and walked down two flights of stairs to the place where his bones are kept in a box so silver it looks like science fiction. I knelt before them and prayed.

In the cathedral, there are masses offered in many languages in the side chapels, but at noon, pilgrims attend the Spanish pilgrim mass. The seats accommodate 1000 people, and everyone else stands.

I had a spot behind a great column in the armpit of the church (my friend Eleanor who is a medieval archaeologist grimaced and corrected me: “Please say transept!”) and could see little of the proceedings, but priest after priest after… cardinal… bishop… appeared. A tiny spunky nun taught the thousands of us the songs and her voice soared over us all and the organ.

It was all very religious, and formal, and beautiful. And at the end of the long service, to the crowd’s delight, the incense clanked and swung over our heads. The sloppiest, holiest, smokiest pendulum in the world. From my spot in the armpit of the church, I could see people from every angle moving their heads back and forth, back and forth, and lots of them were crying at the inexplicable beauty of it.

The large part of the afternoon was spent wandering. I got lost on the way to my albergue, and once I’d found it and paid for two nights, I wandered, sans backpack, through Santiago. I had planned to spend only one day in the city and begin the epilogue to Finisterre and Muxia immediately, but Santiago wanted to hug me longer. So I was in no hurry.

I got lost over and over again and kept ending up at a hilly park. It was golden hour. Dogs and kids and couples sat and drank and chatted all over the place. The sun was hot and the breeze was cool. Leaves crunched underfoot but ice cream vendors were everywhere. Everyone was well-dressed and those who weren’t were clearly pilgrims, with their zip-off pants and knee braces and distinctive limps that kick on once the backpacks are off.

And I met people in this city, over and over again, whom I’d met once or ten times on the way, and we would always hug and smile and say goodbye, but then bump into each other again an hour later anyway.

Ted and I got lost trying to find a restaurant, but it was all right. I said goodbye to one of my oldest camino friends, Magdalena, who had a flight home the next day.

Stacey, Sarah, Warren, Eleanor, Max, Gail, and I drank Galician white wine that night in a bar with no ceiling and crumbling stone walls. We exchanged stories and talked about dumb things and showed each other pictures on our phones and talked about how little we wanted it to end but how happy we were to be there.

And when I got back that night, it felt like we had all graduated and had a grand party, and I was tired and happy.

I was hungry too, since we had only had tapas with the wine, so to cap this epic day, I went to the basement of the albergue and stood before the vending machine, determining the most calorie-dense option. Ramen? Chocolate croissant?

“Excuse me,” said a man behind me. “Are you hungry?” I turned around and he was wearing a green sweatshirt and a smile.

He motioned to a table where another man sat with a pan of pasta and a bottle of wine.

“Please, have some food.”

“No, come share it. Join us.” I only hesitated for a second.

“Thank you. Thank you so much!”

“We saw you looking at that food and didn’t want you eating from a vending machine when we have all this. Sit down. Wine?”

The two had biked the camino. Sebastiano was from Italy and Lukas was from Poland. They gave me pasta “with all the extra things we had in our bags.” We ate it all. We shared stories. They washed my dishes. They went out to smoke and I went upstairs and didn’t see them again.

I fell asleep, as always, to the symphony of snoring.