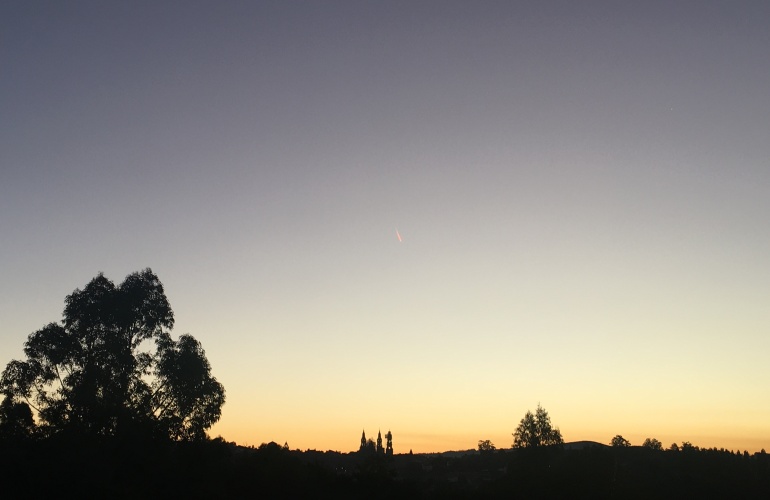 Santiago de Compostela is the end of the pilgrimage. But it can not be.

On the 38th day of the trip, I woke with a smile and packed my bag again (my compostela already wrinkling in its ziploc bag) and walked to the cathedral. I stood before it, and prayed, and turned, and continued in the direction of the sunset before the sun even rose.

90 kilometers from Santiago lies Finisterre, which at some point, for some people, was the end of the known earth. And 30 kilometers north of Finisterre lies Muxia, which is also known as the Coast of Death. And on the Coast of Death, they say, the Blessed Virgin appeared to St. James when he was discouraged by his fruitless evangelism in Galicia. She appeared on a boat made of stone and told him not to give up, and, spirits buoyed, he continued. When he was beheaded, they say his body was miraculously transported to this place. You can still see pieces of the Virgin’s boat on the shore. Before it was holy ground for Christians it was holy ground for others who came to venerate the setting sun. And now, all sorts of people extend their pilgrimage to include Finisterre and Muxia: you can even get certificates there like the one from Santiago.

It was with great pleasure and sadness that I left Santiago, beginning the most beautiful part of my journey, but the last. Yes, after Finisterre and Muxia I will go to Sevilla, and get my hair cut and see beautiful things and wear beautiful clothes and eat fine food and see my friends, but the rhythmic simplicity and spaciousness of the last month and a bit have invited a profundity I’ve only begun to plumb and I fear the conclusion will feel like a cauterization.

Today I’m walking on the 39th day of the journey from Negreira to Olveiroa, which is 33 kilometers, which is about 20 miles.

I walk through the woods in the chilly morning, thinking of all the Facebook friends who got engaged and had babies and trying not to tell myself what’s wrong with me for lacking these milestones. I look at the couple in front of me and the couple behind me and while I’m happy to walk alone, I’m also not.

I regret something I did yesterday: a girl, no older than 11, stood outside her house with a small basket. She said hello to the pilgrims ahead of me and then something I didn’t understand and they all walked on.

And she said the thing I didn’t understand but she held up a tiny braided bracelet, and I said, “No, gracias,” not because I meant it, but because that was my gut reaction to the request of a stranger.

And then I realized as I walked away she was selling bracelets she must have made herself, and what I should have done was turn around and buy one. But I didn’t because I couldn’t bring myself to stop even though I wanted to. I wouldn’t change my body’s momentum.

I’m walking and searching for blackberries. I’ve eaten thousands of blackberries on the camino but none are quite as big and juicy as the ones growing in my ancestral Seattle’s alleys. I have been searching for the perfect blackberry this whole time.

But fall has come. The leaves do crunch underfoot and the ferns are brown. The blackberry brambles are green, but the berries are shriveled or gone. I look hard for berries, for a single one. Weeks ago, they stained the ground and the olive trees and our fingernails.

Then, I see the berry! But there’s someone coming close behind me so I leave it and walk on, not wanting to risk interacting with another person, even though I know it’s not a risk.

That might have been my last chance and I gave it up. I regret walking on but I do anyway.

Everyone says Galicia is rainy and misty, but the days have been hot and dry. The sun shines bright on the fields and makes everything vivid and shaky in the heat, even through dirty sunglasses. The corn stalks are dry and tan. The sunflowers are dead. The farmers have suffocated their fields with clouds of white pesticides. I roll the word fallow around my mouth.

But there is still food everywhere and I’ve tried to remember everything I’ve seen to write it here: figs and apples and limes and oranges. Lemons, peppers, kiwis, plums, grapes, pears, fennel, mint, roses, tomatoes, cabbage, and chard..

A farmer drives a tractor down a dirt road, leading a herd of cows. I stop to let them pass. He is old and so is his wife, who is standing on the running board, holding on with one hand and clutching a big stick with the other. A dirty dog follows them.

After today, I will only have three more days of walking, and I’m doing my best to enjoy every minute, but I want to see the ocean. Farmland is fine, but it smells, and I don’t catch its idyllic appeal. I just want to smell the sea; it has been too long.

If the camino is a microcosm of life, like I once suggested, then what is it I’m walking towards? Death? Being in Santiago felt like heaven, with all the joyful reunions and all the utterings of “well done, you did it!” But now, the path is leading to the End of the Earth and the Coast of Death. I’m chasing the setting sun: there is finality in this.

And we do this every day, this rushing through life while also fearing death.

As this journey nears its end, or perhaps begins its epilogue, I want to slow down and notice everything. And often, I do: yesterday I went down to a river and splashed my feet in the water, savored my sandwich, and then took a cat nap on a boulder, under a Roman bridge. Then, it didn’t matter that I didn’t just get engaged.

Yet still, after all that has happened, I run away from blackberries and little girls.