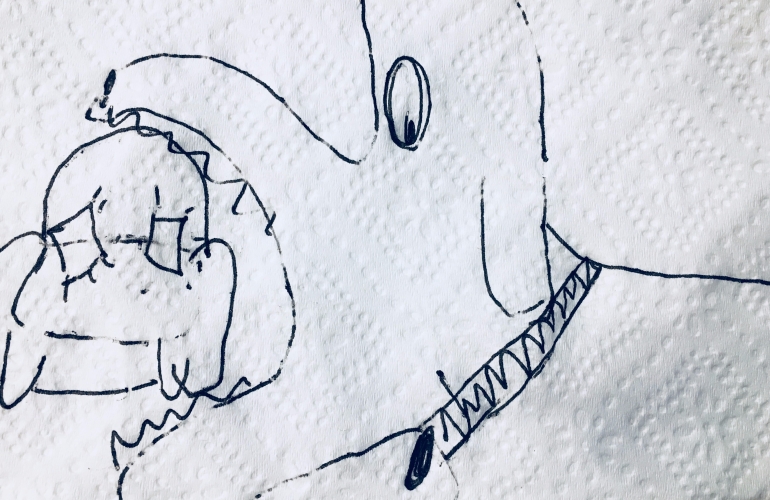 I boarded the 40 around noon on Thursday and there weren’t many people on it, but there was a woman with sensible pink lipstick and cropped gray hair and a pleasant demeanor speaking with a man across the aisle who had a red beard and a dirty reusable grocery bag full of old things and a leather jacket. He had a dog with him but the dog was under the seat so I didn’t see it till he disembarked at Market.

“I’m heading to an appointment,” the woman was saying as I found my seat. It was quiet on the bus and her voice carried. “But I got on the wrong bus. I’m used to going the other direction on this one. I’m going to the doctor. For ten years I couldn’t walk but the good Lord healed my leg so I can walk again.”

“But I’ve still got this problem with my joints.”

“I have had no luck with dogs,” the woman replied. “The first one I had, the day we got it, it ran out in the street and a car hit it and it died. The second one ate the couch.”

Everyone else on the bus who had been pretending not to hear her burst into snorts and chuckles. She didn’t mind or notice.

“And the third bit my son.”

A man sitting in front of me, who had been wearing ear buds and looking out the window, removed one of them and leaned forward.

“When I was growing up,” he said, “we had this big-ass German Shepherd who used to sleep on my chest, put his paws right here. So at night I have nightmares.”

“Last time I had a dog before this one was 20 years ago,” the man with the red beard said.  We were at Market and he was standing and gathering his things, and I saw his dog, a squat, old mutt with cookies and cream fur. “This one saved my life twice. Once on a boat!”

Three days dicking around in Florence and I only just discovered that this is where they blew up that sperm whale in 1970. Link in bio. (Not to one of my David Sedaris wannabe blogs, but to the actual explosion footage.)
The Alvord Desert! (Possibly the most remote place I’ve ever been?) There were wild horses, hot springs, snowy mountains, a vast, thrice-rain-shadowed playa, and generally a lot of views that made my tummy feel funny. It took rerouting an entire vacation, five years on the bucket list, three days of driving to get to the middle-of-nowhere town closest to it—which is still 2.5 hours away—precautionary tire chains, a long audiobook, and a cooler of food, and it was all worth it! If you’re ever in the area (doubtful), be sure to swing by.
Today I celebrate two of my interests—tator tots and religion—by going to the Taco Time whose salsa bar the Rajneeshees attacked.
The next valentine is a bit more racy and features partial nudity.
Wrote a valentine to a guy I stared at during an open mic three years ago. Should be good. (I also draw pictures.)
Shoutout to the kid who drew a cup of water for our winter drink special drawing challenge. As a prize, he has won free cups of water for life!
Look at all that geology.
My bathroom doorknob fell off a few weeks ago. I was just leaving the door ajar but today I shut it and now I’m stuck in my own bathroom. Have a good one. #pleasebuymybook #effortlessstyle #pnw
WHY WOULD YOU NOT LIVE HERE?
%d bloggers like this: