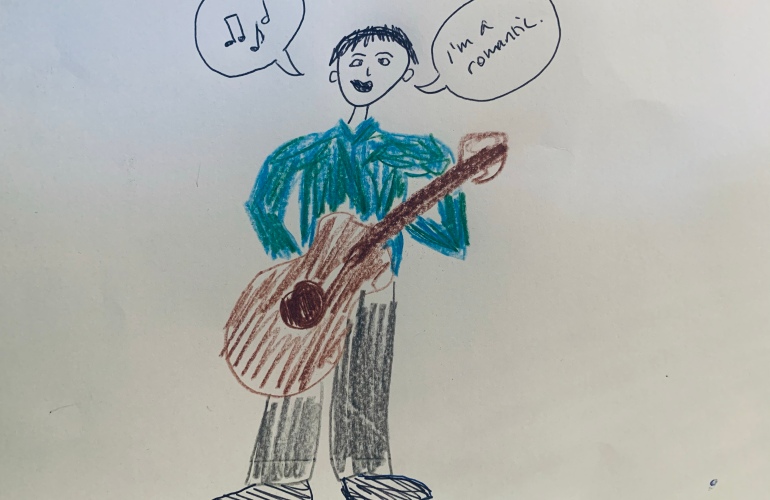 I’m at Stone Way Cafe, and I came here to work on writing my as yet-untitled book, but you, sir, are up on the stage playing guitar and I can’t look away. You’re the fourth act of open mic—it’s 5:30, too damn early for an open mic—and you’re 28, you just said so—rapport. I’m 27. You just played a song called “I’ll Be the Man to Marry You Someday.” I don’t know if you wrote it yourself or if it’s a cover, but I’d be doing you dirty if I googled it. I’m not here to question, but to admire.

I’m watching you and writing about what seeing you onstage does to me. You don’t know I’m writing about you, you probably think I’m just working—a fair assumption because honestly, who hosts an open mic at 5:00—it’d actually be weird if you assumed I was writing about you—but I would make that assumption if our roles were switched because I have just enough narcissism for that—and at the same time, you’re performing. Look at that. We are both making something at the same time. Wow. I keep looking up to stare at you. Maybe we’ll make eye contact. It’ll be awkward and maybe cute—I mean maybe you’ll think I’m cute—and then I’ll go back to my screen to write about how we made eye contact.

Until that happens, here is a description of your appearance. You are the most generic-looking man in the room. You have brown, unstyled hair, and jeans that are neither loose nor baggy, and a flannel shirt with long sleeves buttoned at your wrists. I think men look good with their sleeves rolled up, especially when they play guitar.

Maybe you write words too, the kind that don’t go with music. I play music like you, but I don’t write lyrics. I only write regular words. I would rather write an essay called “I’ll Be the Man to Marry You Someday” than a song. It’d be more efficient. I bet you’d tell me, “Oh, but you’re the best writer in the world and you’re such a great pianist, so you should write songs too,” and I’d be like “No, no, I’ve never cared to,” and you’d help me write a song, and it wouldn’t be that good, but you’d be proud of me and feel like you made the world a better place, by teaching me to write lyrics.

There are ten people in this cafe. I don’t know why this place has open mics so often and so early; people are on laptops here. They’re working. It’d be so easy to talk to you. I could walk over to your table and say “good job” and you’d say “thanks” and then I’d have to have something else lined up, like “Is ‘I’ll Be the Man to Marry You Someday’ a cover?” or “I like guitar but I can only play ‘Leaving on a Jet Plane’ and Chris Tomlin.” It would be too soon to say the sleeve thing.

I’m not attracted to you, really. But you are good at guitar and, like Everest, you are there. Which is enough to get me to write about you. That counts for something. You’re actually the most talented performer so far tonight. I didn’t feel compelled to write about the guy who went before you, who improvised on the out-of-tune piano for his whole ten minutes. The jokes you tell between songs are corny, you have a quarter cup of stage presence, and you say vulnerable things like “I’m a romantic” and “I’m 28” so the audience can connect with you. I’m about out of stuff to say here, but hey, you said you were a romantic. Wouldn’t you like to know that there’s a girl out there who wrote a letter to you while hearing you play guitar, but you’ll probably never meet her, and sadly, you’ll never know you’d look better with your sleeves rolled up.